As you all know, the Student Art Collective began with the mass upheavals five years ago at Brandeis University in the United States. In the difficult yet exciting times between then and now we have seen progress and rallying beyond our wildest dreams, with new collectives forming in Baltimore, New York, Munich, and now here in this beautiful city. How should we respond to the changing contexts and needs of art students from vastly different cultural backgrounds, while maintaining the universalism of our struggle? Perhaps we should first return once more to the initial spark, that we may here maintain a degree of fidelity to its spirit. 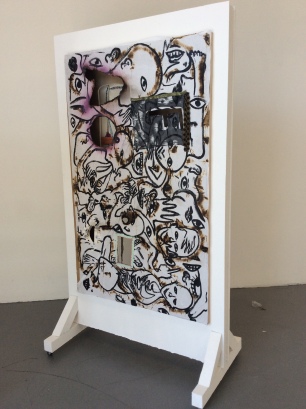 The origin of the S.A.C. is bound up with the increasing neo-liberalization, (or as we now know it, “cyber-mercantilization”) of American art education, and as such, it resonates differently in different national-educational contexts. Art education in the US is exceedingly expensive. More and more, students are treated as customers to be served or clients to be catered to. Professors, on the other hand, are dealt with as temporary labor; freelancers who are utterly replaceable. They are denied health insurance, receive low pay, and must make long commutes to fulfill their duties. This combination results in a degree of entitlement on the part of the students, who cannot help but see their professors as “failed artists” (which is to say, failed in the marketplace), and a certain, perhaps justified, ressentiment on the part of the professors, who must compete with one another for attendance in classes, either through trumpeting their success in work outside the institution, or by tailoring their methods for increased entertainment value. In this way, students and teachers are pitted against one another through the corporatism of the university system. We must work to change the terms of this conflict. It is true that all professors do not stand with us. Many of the peasant adjunct-commuter class harbor reactionary tendencies for which they must be re-educated. The landlord-tenure class is another story. The most successful and well-paid of these running-dog lackeys are indeed “evil geniuses” to be struggled against, and we must not underestimate them. 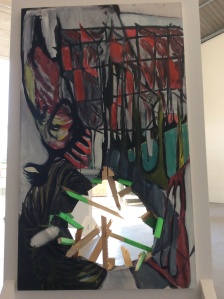 Our insistence upon the re-instatement of oedipal relations in art education was only our first salvo, designed to confuse and disorient our enemy. We began our northeast campaign through means which some have deemed duplicitous, disingenuous, totalitarian, or phallic. These were the accusations leveled at our exhibition : “Student Paintings with Damage and Conservation”. To respond, let us examine the situation where and when it took place, and the particular space it opened there. Principally: the aesthetically impoverished bourgeois art students of Brandeis University and the hard working faculty who served them. Is it not true, comrades, that the art students of Brandeis University were spoiled rich brats seeking only high letter grades that they might hand to future employers as an infant presents its parents with the gift of a freshly produced turd? Is it not true that the administration utilized the art department as a recreational facility for business students which was, at the same time, capable of boosting their GPA’s? Were not wealthy parents paraded through student exhibitions created for THEM, that they might feel they were “getting something for their money”? These are the reasons we struck in the manner we did. The destruction of student paintings by faculty prior to their exhibition as the production of a collective, rather than one in which authorship was recouped underneath individual’s names, created a void in this situation which identified these antagonisms precisely as I have stated them. 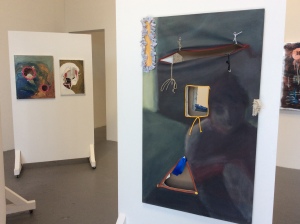 Here in Europe, we are faced with a different set of problems. With free art education for all, supported by the state, we must now ask ourselves another question and propose another challenge. As Comrade Nino Bozic has so aptly put it, we must “deepen the antagonism”. In this direction, I have already taken the first step. I have enrolled as a student in the Kunstakademie in Munich. Why have I done this? Have I not already completed my studies? The answer is “Yes”, however, the role of making revolution in european art schools does not lie with the professors, as it does in America. Here, professors are well paid, and wield considerable authority. Indeed, who has not heard stories of arrogant professors marking up their student’s paintings with corrections? I recently heard a story about a teacher who set his student’s painting on fire in front of the class. It would seem that Oedipal relations are firmly entrenched, and so it is no longer the role of the professor to destroy the student’s painting, it is now up to US as students to bring about this fiery transformation.

Before, our strategy was to attack painting at the nexus of social, educational, expressive, and sentimental/psychological/fetishistic relations. Insofar as these constructions were our true enemy, Painting itself was incedental to our goal. The paintings we destroyed and repaired might have been replaced by nearly any product of our labor. No longer. It is now Painting in its essence, as human invention, that we seek to overturn. No longer will we repair the holes which we create in our paintings.

Instead, we shall draw upon the innovations of Comrades Colleen Asper and Marika Kandelaki of the collective Hole, and affirm these cuts, tears, and punctures as VOID. But learning as we have from the past, we now know that it is not merely the void which counts, but the very inconsistencies and tangles of dangling threads around its tattered edge. It is upon this threshold that we will stand, welding with the flame of contradiction our individual and collective identity. This is the site of struggle, the tourbillon on which we will now stake our wager and focus our attentions.

Let us know what you think... Cancel reply

ACW in the News

Letter from the Editor